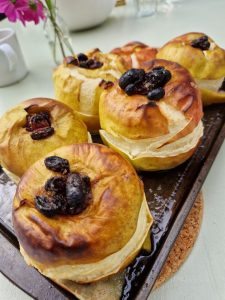 I’ve cooked these and posted about them on facebook and EVERYONE comments, ‘my mum used to make these’ (which makes me think perhaps that the people I know are rather old because many grown ups that would be grandmother age). Anyway, being mum is part of what happens here quite a lot.

Bramleys uniquely fluff up on cooking and are a tiny bit tart. Baked apples are fluffy on the outside but denser on the inside, which just adds to the jeopardy fun of eating as they slide about the bowl in cream as you dive in. Maybe a spoon and fork to eat them with.

Super simple, but super seasonal. Best is to know a friend with a tree. That friend could be me, come along to the Orchard Day in early October, by now, coming up to 6 years here, a tradition.

Ingredients (serves 6, one for breakfast each day through the week, an apple a day and all that…no, I mean to share with friends)