Viveka Gardens is a place to connect to oneself, spirit and others through yoga practices, nature and food growing. There is a great joy for me in working with the land and there’s been a steady progress making some changes since getting here in November 2016.

2016-17 saw the thinning of the existing woodland that was planted about 15 years previously with the help of yoga student and woodsman Jim White and his team. We made sense of the space and created a circuit path through it, and got some fire wood. Starting from the spring equinox, I worked with land shaman Jane Embleton for 12 months to tune into the feel of the place and ask permission to bring the Viveka vision, making changes to a place that had been a livestock farm. The orchard provided an abundance of apples and pears for eating and sharing, and as well as some varieties to store until March, some were sold to our organic market gardening friends at Harvest Workers Coop and Down Farm.

2017-18 was the season of tree and hedge planting on a massive scale – 600 trees and 600 hedge plants in and on the margins of the Hare Field – with the help of many volunteers and our first community event: read this report. The summer saw a drought and a good crop of hay when otherwise there was little for sale. A yoga student farmer friend said ‘cut it!’, though I quibbled about losing possible vegan organic status. It was cut and sold to another student who has an ethical stud, and to a sheep sanctuary. Already inspired by the amount of insect life and a range of meadow flowers arising once grazing has stopped, I began to see how the field could be meadow-ised. We had our first apple pressing day led by Dan the apple man and yoga student Ruth and her husband Chris. This brought together neighbours, community, yoga students and other friends, and raised some money for a much loved local couple who had lost their business.

2018-19 saw the field cropped again for hay and inspiration came from the Moor Meadows group to develop the meadow for biodiversity. Nicky Scott of Chagford invited me to collect yellow rattle from the meadow he ‘curates’ and this was sown in the Hare Field to parasitise the dominant grass and make way for more flower species. In the kitchen garden we gave up trying to suppress the pernicious weeds such as dock and nettle with cardboard and mulch, laid a suppressing membrane and put in some lovely raised beds, built by my neighbour here, Andy. We had great crops of squash, beans, chard, carrots, potatoes, herbs. With our second Orchard Day, another lovely time of coming together a Viveka tradition has been established. And with gardener yoga student Marlowe and another trusty team of workaway volunteers the mixed herbaceous borders got a clearing digging over and mulch, ready for spring planting.

2020 -21 during the pandemic there were no major projects but there was more biodiversity in the meadow-ising fields, the new trees mostly grew above head height, the hedges thickened, there was super duper veg from the raised beds in the kitchen garden and the ornamental garden grew floriferous with home-sown annuals. A deck was built that linked the Bliss Barn to the kitchen garden.

2022 saw the installation of four roofwater collecting troughs with bench seats on top, a good size to sit or lie on in the sun. The troughs hold a good amount of water for plunging in watering cans to water both kitchen and ornamental garden. 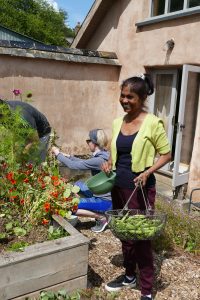 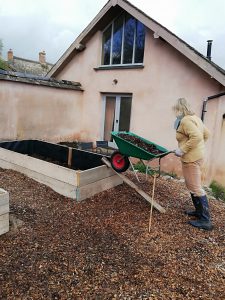 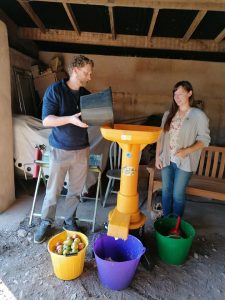