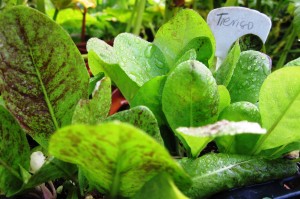 I was asked, in the light of the drought and hosepipe bans due to come into force at the Easter weekend in south east England, which vegetables require little water.  I had to bite my tongue as there’s not a crop that doesn’t require regular watering. It’s much more about using basic sustainable practices in the first place focusing on the root zone, and general good ‘husbandry’.

1. It all starts with sowing. Sow at the right time so plants will go out when they are best able to cope. Water underneath the sowing trays or modules so roots are already developing healthily, and are getting the good habit of reaching for water. Puddle in transplants so seedlings make the transition to planthood able to spread their roots straightaway.

2. Root trainers – better for larger seeds such as peas, beans and cucurbits – draw the roots down along grooves. Once the roots hit the open base they ‘air prune’:  stopped from going down they produce a good lateral system with plenty of root hairs. Root hairs are virtually microscopic, and short lived, but perpetually being regrown. Such is their number they can (depending on the species) increase the root surface area to absorb soil moisture by half.

3. Phosphate is the macronutrient that promotes good root growth. Rock phosphate is a non-renewable resource and a couple of years ago prices rose enormously as Russian mines held the world to ransom. Another ‘traditional’ source is bonemeal, but do you really want dead animals and associated pathogens on your soil?  Sustainable phosphate can be found along with other macronutrients in comfrey: make a tea yourself or buy comfrey pellets. The Organic catalogue also does a non-animal organic macronutrient feed. There’s a lot of phosphate in mammalian poo too, so add manure (horse, ideally, as they’re vegetarian and not generally given drugs as animals for food production are).

4. As ever, a healthy soil – the rhizosphere, or root zone – promotes healthy plants less susceptible to drought. The no-dig method allows a diverse and humming micro-organism ecology in the soil.  All these fungi and bacteria convert organic matter  into mineral form which plants can take up, a process called humification. Recently smelling ‘spring in the air’ has been due to the life in the soil warming up and all this tiny life ‘exhaling’ en masse.

5. Organic matter: add this constantly! To feed the micro-organisms, to protect the soil structure from being battered by rain, to conserve moisture when used on the surface as a mulch. Manure, leaf mould, garden compost, garden centre compost (peat-free), grass clippings (though likely to contain weed seeds) and even dampened newspaper are all great sources of organic matter that will also rot down to contribute to the soil life. See feed the earth.

6. Water regularly around the root zone, not necessarily all over the leaves and the centre of the plant but thinking carefully about where the roots will be and where you want them to reach to. Water in the evening to reduce loss through evaporation and to avoid scorching the leaves with 7. Above all be an attentive gardener: watch and study your plants for what they need and how they are growing. If pests appear, pick them off as they will stress the plant, making it less able to withstand drought. If plants look wilting, wait til it’s cooler and the plants are in shade before watering, but make sure you do that.

Edible plants that can withstand less frequent watering are: some mediterranean herbs (sage, rosemary and savory, for instance), globe and jerusalem artichokes, perennial veg in general such as asparagus, rhubarb…um…brambles…

Maybe also shower for a shorter time, consider what each can do to reverse climate change (‘two abnormally dry winters’) and to generally reduce one’s individual carbon footprint.  One exemption to the ban is using a hosepipe to water an area of grass or artificial outdoor surfaces used for sport or recreation, where this is required in connection with a national or international sports event. I wonder what that could refer to? Maybe next year we’ll see a reversal, with veg plots given priority – the cost of food and the politics around the production of food can only get higher on the agenda.  Join the food growing revolution now.